Who Knew? A Zebu? In Quesnel! 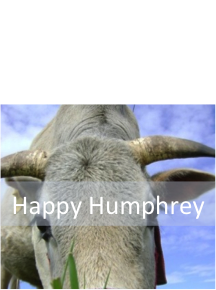 Humphrey never expected to end up in Quesnel but thanks to the Eyford girls he is happy, healthy and loving life.

We traced Humphrey’s story back to an auction in Chilliwack but as a ZEBU he has roots in Africa.  Humphrey is a miniature zebu who was bought for a petting zoo.  Due to neglect, he was seized by the SPCA not once but three times!  Imagine the life he endured.  His hooves were overgrown, he was overweight, he had pressure sores and he could barely walk.  Finally, the Crooked Leg Ranch crew was called and asked if they could provide or find a home.  Of course!  Two of the girls drove to Victoria in a cargo van prepped with hay, shavings, water and oats.  They backed the van to a small mound of earth, hoping that Humphrey would cooperate and were surprised when he hobbled right in.  They worried about him causing a fuss on the ferry but those fears were unfounded as Humphrey seemed to realize that he was heading for greener pastures.

His health slowly improved however; he was not safe quite yet.  Sometime later, Humphrey’s was found with blue lips and a bloated stomach.  He was so weak that they thought he was going to die.  That was a midnight trip for the vet!  The girls took 2 hours shifts to be with him.  Thankfully, with a healthier diet, he made a remarkable recovery.  And, it turned out that zebus have blue lips naturally. J  But Humphrey was not bred for the Cariboo winter so he shivered as the cold came.  The girls gave him ear muffs, adapted a horse blanket to accommodate his hump and put a heat lamp in his shelter to make sure that he was as comfortable as could be.  Now, 4 years later, Humphrey the Great is a fixture at the ranch.  Though he is sometimes bullied by the llamas, he actually has it pretty good.  He had a friend named Hamish for a while, another cow and he makes an occasional public appearance at the Fall Fair.  Humphrey is one very fortunate zebu thanks to the Crooked Leg Ranch ladies. 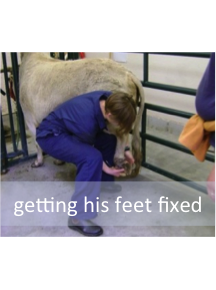 Getting his feet fixed 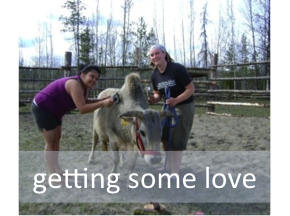 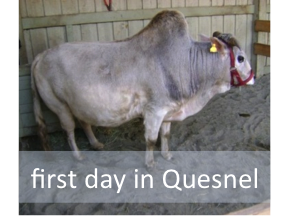 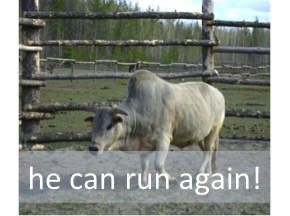 He can run again 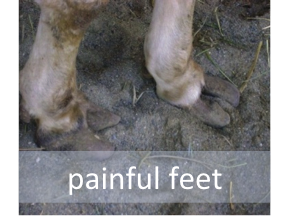