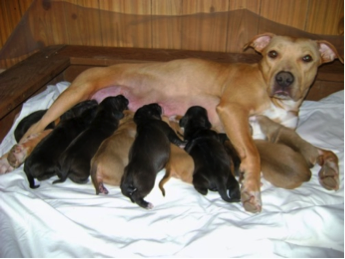 What do you think when you hear the name Pit Bull? We have been conditioned to think that they are aggressive and dangerous dogs but this is not always the case.

Gabe is a pit bull cross dog of about 45 pounds. For some reason, she developed a fear of many things and would cause problems when she felt cornered. She made messes, cowered and was generally uncooperative with her owners. They finally decided that Gabe needed more help than they could give her so she was surrendered to the Crooked Leg Ranch.

When a dog comes to them, the girls assess its health, mental condition and potential for adoption. Willow began the job of reconditioning Gabe’s behaviour and she was making good progress. She also needed to be spayed so they made an appointment.

But within a few days, Willow noticed that Gabe was getting bigger around the middle so they cancelled the appointment and booked an x-ray instead. There were 10 tiny beating hearts. When the former owners were contacted, they could not recall a potential mate but did mention that there was a miniature dachshund around. Hmmmmm

Months later, Gabe gave birth to all 10 pups and was a proud mom. The pups grew normally except that they kept getting longer and longer. That confirmed it! They were Weiner Pits! All ten pups were easily adopted out, most of them went to families around Quesnel and a few now live at the coast. With no placement for Gabe, it was decided to transfer her to a pit bull rescue and we hope that she is now a happy and healthy dog.

When animals are surrendered to the ranch, a donation is requested. No animal is refused if no donation can be given but often the amount donated is small in comparison to the amount and cost of the care given an animal during rehabilitation. If you can support the efforts of the Crooked Leg Ranch Society, please visit: crookedlegranch.com. 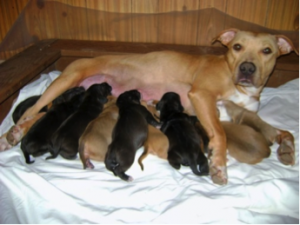