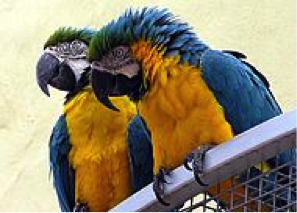 Joey was beautiful, bright blue and gold. The local pet store always had an assortment of parrots and Joey became a store mascot because he was large, colourful and grouchy. Joey was a macaw, a South American parrot that would grow to nearly a metre long and might live over 50 years. Though beautiful, no one wanted to buy Joey because he was an unhappy bird that would screech and threaten people when they came near. Part of her job was to clean the parrot cages so Fauna developed a trick of tossing peanuts to one side of the cage, getting Joey to feed peacefully for a while, while she cleaned the other side of the cage. Gradually, Joey became less aggressive when Fauna came around. He started to trust her and eventually Joey could be taken out of the cage to would sit on the rail of a cart while his cage was cleaned. This soon evolved to riding on her shoulder as she worked around the store.

Joey could not fly because he wings had been badly clipped, causing him to bleed heavily. The damage was such that they did not know if his feathers would ever be healthy again. Soon, Fauna and Joey were a pair and as soon as Fauna entered the store, Joey wanted to be out, with her. But, still, no one was interested in buying him because he was grouchy with everyone else. The store owners decided to try transferring him to a larger store and one day, when Fauna came to work, he was gone.

The very next day, after consultation with the family, she drove to the other store to retrieve Joey because the bond had grown that strong. When she entered, she was warned that he was aggressive but as soon as Joey heard her voice, he clung to the bars of the cage and reached for her. She opened the door and he hastily scampered onto her shoulder. That settled it! He was coming back to Quesnel and would live at the ranch.  The family was warned that he could be a grouch but the warning was not needed because Joey took to his new world with ease. A corner of the living room was adapted for him. He was given a place to climb, wood to chew and room to stretch. Still not able to fly, he would waddle around the house and hop onto the back of a chair to see what was going on. His vocabulary was small but he learned to say hello. He had to be taught not to bite hard and soon he would pretend to nip someone’s arm and then pull back and say “ouch”. He also mimicked the sound of a crying toddler very well.

Though in a good environment, things could still be better for Joey so they contacted a parrot rescue in Kamloops where birds had room to fly. With regret, they decided that he would be better there so Fauna spent a week while he transitioned to his new home. He flourished! His feathers grew back. He found a new best friend named Peanut. He learned to fly. Months later, she went to visit him, to check on his progress and with mixed emotions, she found that he didn’t need her anymore. Joey was as free as he could be

Photo taken from the net