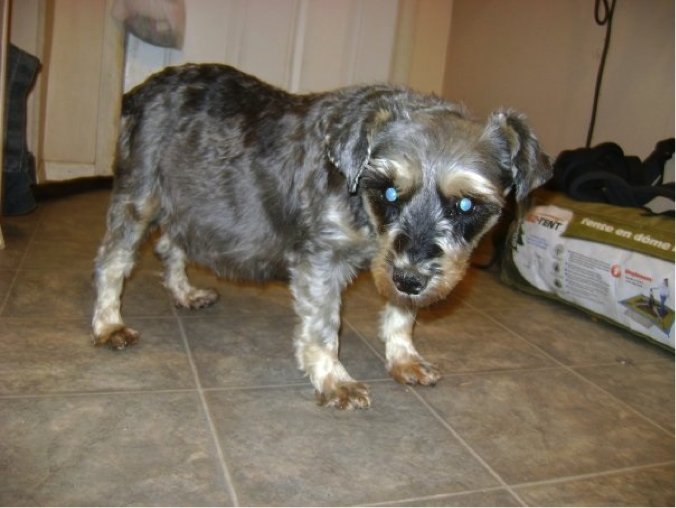 Imagine living in a kennel and having litter after litter for years.  That was Ellie’s life as part of a puppy mill.  She had been so restricted that her owners did not even realize that she was blind!  This miniature schnauzer produced as many puppies as she could until her body said no more.  Ellie was no longer valuable because all of the puppies in her last litter died.  Thus, she was surrendered to the Crooked Leg Ranch.

Willow noticed immediately that this dog was blind because it walked with caution and bumped into things.  Further assessment found that she was not well nourished, she was not well groomed and most obviously, she was depressed.  During her time at the ranch, she recovered well, receiving better food and lots of love.  She had room to move about in safety and soon she became a member of the family.

Many of the animals that are taken in at the ranch will eventually end up somewhere else because there is more opportunity for adoption on the coast.  Ellie was transferred to a home in Victoria with a lady who takes in animals with special needs.  Since Ellie was blind, she qualified and finally, she was in a forever home.

Not long after though, a routine examination found that Ellie was riddled with cancer so she did not live much longer.  Gladly, her last months were cushioned with love.

Please be wary of buying animals on line because you cannot be sure about their living conditions.  Ellie and too many other dogs have had to endure this kind of abuse. 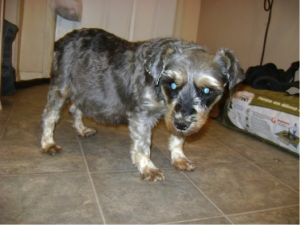